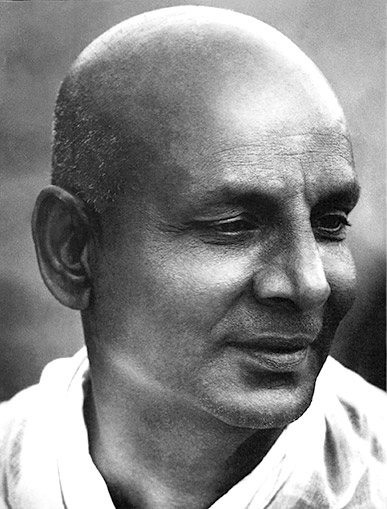 Swami Sivananda’s life was a radiant example of service to humanity, both during his years as a doctor and later as a world renowned sage and jivanmukta. To serve all, to love all, to mix with all and to see God in all beings were the ideals he taught and lived by. Born on September 8, 1887, to an illustrious family in Tamil Nadu, South India, he displayed spiritual tendencies even as a young boy. He had a natural flair for a life devoted to the study and practice of Vedanta, along with an inborn eagerness to serve, and an innate feeling of unity with all.

Though born into an orthodox family, his piety was balanced by an unusual broad mindedness and lack of prejudice. Even as a young man, his driving force was the service of humanity which led him to become a medical doctor. He served the poor in Malaysia for many years, but soon felt that this was not enough. Divinely blessed, he gave up his medical career and took to a life of renunciation.

He returned to India and spent a year wandering before settling in Rishikesh, Himalayas in 1924. There he practiced intense austerities, found his guru, Swami Vishwananda, and was initiated into sannyas. For the next seven years, Swami Sivananda spent most of his time in meditation. From the early 1930s onwards, he embarked on frequent and extensive tours of India and Sri Lanka, stirring the hearts and souls of thousands with his spiritual magnetism, strong vibrant voice and great public speaking abilities. Wherever he went, he conducted sankirtan (chanting), delivered lectures and taught people how to stay strong and healthy by practicing yoga asanas, pranayama and kriyas. Above all, he urged his audiences to strive constantly for spiritual development.

In Rishikesh, meanwhile, an increasing number of disciples had begun to congregate and an ashram grew up around him. With his unrestrained generosity, spirit of service, deep devotion, and his constant good humor, Swami Sivananda set a supreme example to his students. In 1932, he started the Sivananda Ashram; in 1936 the Divine Life Society was born. The Yoga Vedanta Forest Academy was organized in 1948 all with the aim of spreading the teachings of Yoga and Vedanta.

Swami Sivananda’s teachings crystallized the basic tenets of all religions, combining all yoga paths into one – the Yoga of Synthesis, which he summed up with “Serve, Love, Give, Purify, Meditate, Realize”. His own life was a shining example of the ideal wish to spread his message of love and service. He had disciples around the world, of all nationalities, religions and creeds. Swami Sivananda entered mahasamadhi (left his physical body) on July 14, 1963. 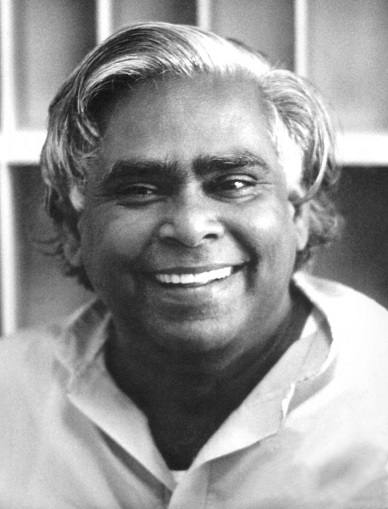 A close disciple of Swami Sivananda, Swami Vishnudevananda was born in Kerala, South India on December 31, 1927. After a short career in the army, he ‘accidentally’ came to know of Swami Sivananda’s teachings after coming across a copy of Sadhana Tattwa (Spiritual Instructions) which began “An ounce of practice is worth tons of theory. Practice yoga, religion and philosophy in daily life and attain Self-realization.” This impressed him so much that he went to Rishikesh to meet his Master. Swamiji entered the Sivananda Ashram in Rishikesh in 1947 at the age of twenty, took sannyas (became a monk) and was appointed the first professor of hatha yoga at the Sivananda Yoga Vedanta Forest Academy. There he trained thousands of students, both Indian and western. At the same time he continued his own practice, mastering difficult, advanced hatha yoga techniques. When asked how he perfected these ancient practices, which to a great extent had been lost to the modern world, he would say, “My Master touched me and opened my eye of intuition. All this knowledge returned to me from past lives.” For ten years, he lived and worked under the direct guidance of his Master. In 1957, Swami Sivananda sent Swamiji to spread the ancient teachings of yoga to the West, with the words “people are waiting.” Swami Vishnudevananda established the first Sivananda Yoga Vedanta Centre in Montreal.

The first Yoga Camp, in 1961, was at the summer home of some students. He was amazed to see Westerners willing to give up all their material comforts to sleep on the floor and take cold showers. In February 1962, Swamiji came to the present site in Val Morin, Quebec, and that summer, the Sivananda Ashram Yoga Camp was opened.

Swami Vishnudevananda worked tirelessly to instill a strong, practical understanding of yoga and Vedanta in the people who came to him. He taught a synthesis of yoga designed to work on all aspects of the personality. His motto ”Health is Wealth. Peace of Mind is Happiness. Yoga Shows the Way” continues to inspire all who come to learn about the yogic lifestyle at the ashrams and centres around the world. Author of the long-time bestselling ‘The Complete Illustrated Book of Yoga’, Swami Vishnudevananda was recognized as a world authority on hatha and raja yoga. His other books are: Meditation and Mantras, A Commentary on the Hatha Yoga Pradipika, and Karma and Disease. Swami Vishnudevananda attained mahasamadhi on November 9, 1993.