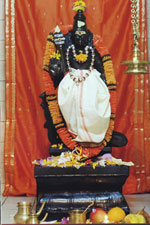 The purpose of Lord Subramanya’s incarnation was to destroy the powerful demon Tarakasura. Tarakasura was oppressing the Devas (celestials). All the Devas sought help from Brahma (the Lord of Creation). Brahma advised them to solicit help from Kama (Lord of Desire). Kama agreed to entice Lord Siva from his Yogic Samadhi, and to unite with Parvati. From this union a powerful son would be born who would destroy the demon Taraka. The Devas proceeded to Mount Kailas with Kamadeva and his companion Vasanta (spring season). Kama stood behind a tree and shot his arrow of passion at Siva, just as Parvati was offering flowers into his hands. Siva became angry at this disturbance of his meditation. He opened his third eye and burned Kamadeva into ashes. Through his Yogic vision Lord Siva saw that the birth of Subramanya was absolutely necessary to destroy the powerful demon Tarakasura. Siva’s seed ejaculated from his body into the fire. The seed was too powerful for the fire. The fire gave the seed to Mother Ganga. Even Ganga was unable to retain the seed, so she gave it to the Saravana forest. It was in the Saravana forest that Subramanya was born. Hence he is known as Saravanabhava. Subramanya became the leader of the celestial hosts and the destroyer of Tarakasura. Valli and Devayani are his two wives. They represent Kriya Shakti (Action) and Jnana Shakti (Wisdom). Lord Subramanya bestows material and spiritual prosperity, and success in all undertakings. Guha, Muruga, Kartikeya, Shanmuga and Velayudha are some of His many names. 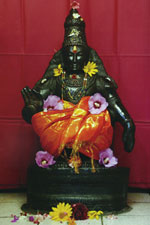 Ayyappa was born from the union of Siva and Vishnu and therefore his name means Father Father. Ayyappa is known as the Lord of the Kaliyuga the present age (Iron Age). The Devas (Gods) and Asuras (Demons) set about to churn the ocean for its Divine nectar. When the divine amritam (nectar) arose the Gods and Demons began to quarrel. Lord Vishnu took the form of Mohini (the Enchantress) to distribute the nectar and help resolve the dispute. Lord Siva looked at the beautiful form of Mohini and united with her. Ayyappa was the son born to them. He is called Hari, for his father Vishnu (as Mohini), and Hara, for his father Siva. Lord Parasurama installed temples for Ayyappa along the borders of Kerala in South India. Among them, Sabarimalai is the most famous and important. In the course of time, the Sabarimalai Temple was destroyed by Muslim intruders. A great yogi, who was doing tapas in the Sabari Hills, saved the princess of Pandalam who was kidnapped by intruders. It is said that an incarnation of Ayyappa was born to the Yogi and the Princess. He was a mighty prince, bringing peace and prosperity to his Kingdom. One Makara Sankranti day, he marched towards the Sabarimalai Temple with his trusted Muslim Minister Vavar and merged into the Idol. People from all walks of life go on pilgrimage to Sabarimalai every year. They make certain vows and after a difficult journey they are blessed with the Darshan of Dharma Sastha, another name for Ayyappa. As Sabarimalai is a holy site for Hindus as well as Muslims, Sri Swami Vishnudevananda wanted a shrine for Ayyappa in the present Temple, to spread the message of Love and Unity. 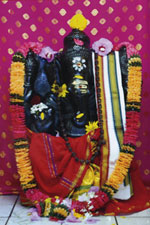 Ganesha is the son of Siva and Parvati and the brother of Lord Subramanya . The Goddess Parvati was bathing and needed someone to guard her privacy. Siva and his entourage were out hunting so Parvati created Ganesha out of the cells (cloned) from Her body. She placed Him at the entrance to the house, instructing Him not to permit anyone inside while she bathed. Meanwhile, Siva returned home and was stopped by Ganesha at the gate, taking Him for an intruder. Siva got angry and cut off Ganesha’s head. Parvati came to know of it and grieved. Having realized that Ganesha was his son Siva ordered his servants to bring the head of the first creature they found sleeping with its head facing north. The servants made a thorough search and found only an elephant. The head was cut off and brought before the Lord. Siva joined the head of the elephant to the body of Ganesha.

Ganesha is known as the remover of all obstacles and is worshipped at the beginning of all undertakings. Nothing is undertaken without Ganesha’s support, grace or blessings. He is an embodiment of wisdom and bliss. Ganapathi, Eka Danta, and Vigna Vinayaka are some of his many names. 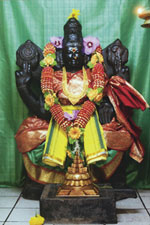 Mookambika Devi represents the feminine energy of Brahman (the Absolute). She is the wife of Lord Siva. Siva becomes complete only when he is with Devi. It is said that when Devi and Siva unite, bliss is attained in all creation. Mookambika incarnates periodically to destroy various demons. She has many names indicating the specific purpose of her incarnation and her unique qualities. As slayer of Chanda, she is called Chandika. When she kills Raktabeeja She becomes Durga. As daughter of Parvatha, Lord of the Mountains, She is Parvati. As consort of Brahma (the Creator), and bestower of wisdom She is Saraswati. As Lakshmi the consort of Vishnu (the Preserver), She gives wealth.

The famous Mookambika Temple in Kollur has a beautiful story behind it. The great sage Sankaracharya had the blessing of Devi’s Darshan in the Vindhya Mountains. Sankaracharya wanted Her to come to Kerala. She agreed to follow him on the condition that She would stop if Sankara turned to look back at Her. As She walked, her anklets made a tinkling sound. At one point when no sound was heard Sankara turned back to look. Devi stopped in that spot and that is where the great Mookambika Temple now stands. The place is known as Kolapuram or Kollur. It was named after the great yogi Kola Rishi, who did Tapas there for a long time.

The Sun, Moon, Mars, Mercury, Jupiter, Venus, Saturn, Pluto, and Neptune are known as the Navagrahas or nine planets. These planets have a tremendous influence on all living beings as well as the weather, tides, and rhythms of Mother Earth. The Navagrahas are worshipped so they will only have a positive influence on our lives. 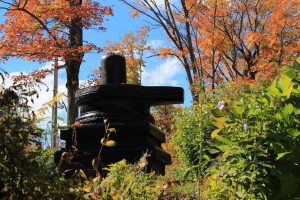 Siva lingam represents the formlessness of God. Lingam is the primordial symbol of the divine God consciousness. The shape of Yoni & Lingam also depicts the point where the unmanifest and manifest energy of God meet – without beginning or end. 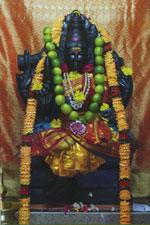 Goddess Mariamman is revered and worshipped widely across Sri Lanka and South India and in North India as Sheetala Ma. She is believed to have the power to bestow or remove life-threatening ailments like smallpox and chicken pox. Despite Mariamman’s great popularity to this day, the origins of her cult remain obscure.

Renuka Devi, the wife of a great sage fell in love with a celestial being who was young and handsome. Her husband knowing this sent her out of the ashram to live elsewhere. The sage also died and Renuka threw herself on the funeral pyre with her husband. Her clothes were charred and she was burnt in several places.

The rain God doused the fire and the villagers took care of her with new clothes and ornaments to ease her distress. Lord Siva appeared and renamed her Mariamman and declared that she was none other than Parvati, Uma, Parameshwari the Divine Mother.

Renuka has since been known as Mariamman, Sheetala Ma, etc: according to the local tradition. Anyone suffering from burning fever or poxes are immediately given relief by Mariamman in return for the kindness shown to her by the villagers and also because of her great compassion for mankind. Villagers to this day believe and are benefitted by Her munificence 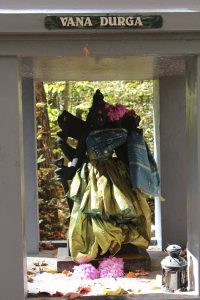 There are nine Durgas, known as Nava Durgas, each expressing a novel protection of her creation.The feminine energy expressed as the divine mother Durga is worshipped all over as the great protector.

With fire She guards, with the twang of her bow She drives fear from the heart, with Her trident She grounds our satwa, rajas and tamas, with her sword She destroys that which is evil and destructive to us and with her bell She rings the message of truth.

Vana Durga protects us in nature, from predators, from the wrath of nature herself in the form of lightning, hurricanes, earthquakes etc. Inside us She is the fire of truth ever burning and guiding us back to God.

She is nourishing in the form of rain, as cattle, as vegetation. She is ever pouring Her Grace for our sustenance. 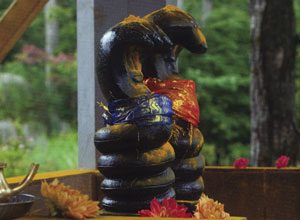 Nagas are serpents, serpents that are the chosen instruments of deities. They represent the mind which is complex and ever changing. The message is when they are under control they are very useful and productive. Lord Siva wears them as his ornaments. The peacock and serpents are mortal enemies yet in front of Lord Subramanya they co-exist forgetting their animosity. In conscious living under the tutelage of a guru there is harmony. Subramanya is also known as guruparan.

Serpents are also endowed with powers to bless people with progeny.a 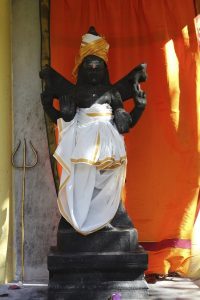 Bhairava is the guardian deity of the abode of Lord Siva. He is called kshetra pala. The term Bhairava means “Terrific”. As the guardian of the abode of Lord, His form is very fierce, with many weapons, naked and decorated with skulls. He has a smile on His face that threatens wrong doers and protects the devotees. He has a dog as His vehicle and is referred to as shuna vahanar. Bhairava is not a form of Lord Siva, but is very closely associated and one of the powers assigned by the Lord. It is customary that keys of the temple are given to Bhairava after pujas are completed for the day and again taken from Him the next morning before the opening. As the guardian deity He is also worshipped after any of the festivals at the temple.